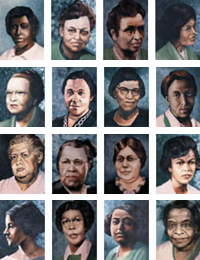 ALPHA KAPPA ALPHA SORORITY, INC. was the first Greek letter organization established by women of color in the United States. During the school year 1907-1908, Miss Ethel Hedgeman, after a year of illness returned to Howard University, Washington, DC to begin her junior year. She had the inspiration and desire to organize a sorority of student leaders. During the fall and late winter, she discussed her idea with her classmates and a few members of the senior class during the fall and early winter.

On January 15, 1908, the group met and agreed to present their written constitution to the college President and Deans. They were granted permission to organize. In late February, 1908, seven honor students of the Class of 1910 were admitted to the group. These sixteen women are the Founders of Alpha Kappa Alpha Sorority.

On January 29, 1913, under the provisions of Subchapter Three of Chapter XVII of the Code of Laws of the District of Columbia, Alpha Kappa Alpha was incorporated as a perpetual body, with powers to organize, institute, and charter subordinate chapters whose particular purposes and objectives would be educational, and would promote the intellectual standard and mutual uplift of its members.

On January 15, 2008, hundreds of our members will return to Howard University to begin the official celebration of our CENTENNIAL. We will pay tribute to our Founders, meet old friends, make new friends and contribute to the Centennial Book Drive.

Since our founding, nearly 800 chapters have been organized and are located in the United Stated (including Alaska and Hawaii, West African, England, Germany, Korea, Japan, and the Caribbean). For more information please visit our national website at: www.aka1908.org.